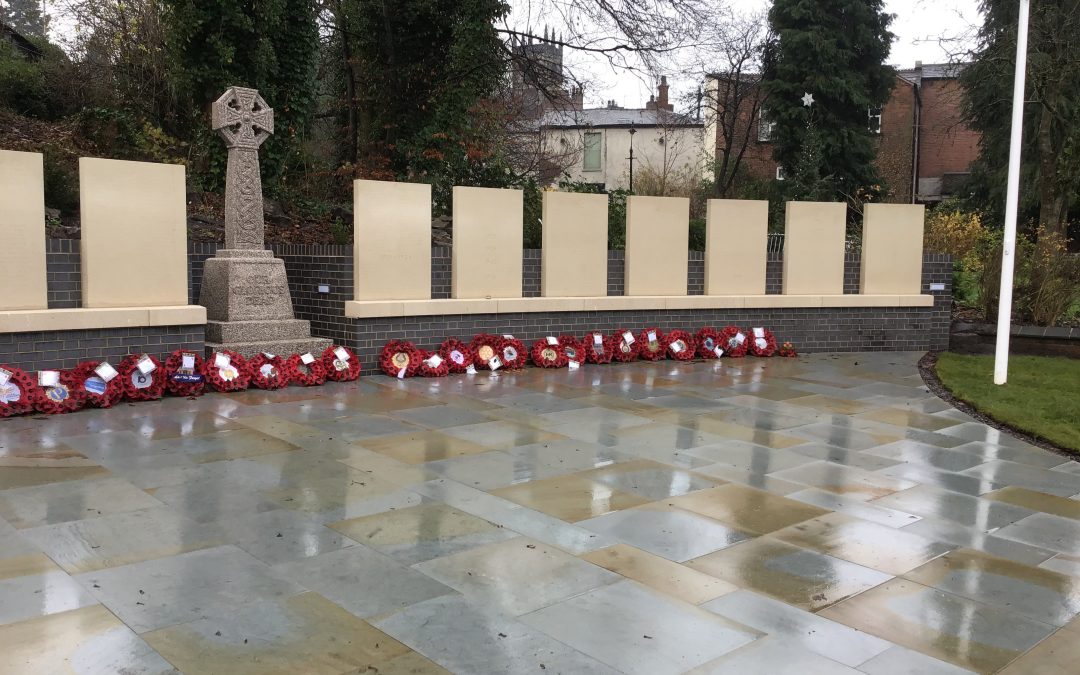 After many years in the making, the newly renovated Congleton Cenotaph was officially unveiled at a dedication event on Sunday 19 September 2021. The improved site now contains more than 600 names of the local men and women who lost their lives through serving their Country. The town’s fit and proper cenotaph is now a safer, more attractive and fitting place for people to visit.

Congleton Town Mayor, Cllr Denis Murphy said: “It was an absolute pleasure to see so many people turn out to witness the official dedication of our new cenotaph. I would like to acknowledge local residents, members of the clergy, members of the armed services, distinguished veterans, civic guests and fellow councillors for playing a part in the parade and service. Special thanks must go to Her Majesty’s Lord Lieutenant of the County of Cheshire, Lady Redmond MBE who did us the honour of cutting the ribbon and Revd Ian Enticott who conducted the service.”

The parade left West Street car park, led by the Rode Hall Silver Band with Gary Dolman from the Royal British Legion taking the role of Parade Sergeant. The service commenced at 2.30pm when the procession arrived at the Cenotaph. Short prayers and poems were read, the national anthem sung and the Last Post was played by Michael Whitehurst. The dedication concluded with a fly past from a Spitfire. Earlier plans for a Lancaster Bomber had to be altered on the Friday due to technical issues and the time was changed from 3.12pm to 3.50pm. Members of the public were invited to lay flowers in memory of a loved one named on the new plaques.

The refurbished site features three new flag poles and on the day the Union Flag, the Town Flag and the Prinses Irene Brigade Flag were flying proudly to commemorate the occasion. The 1920’s granite Celtic Wheel Cross retained from the original site took centre stage for the proceedings, on an improved elevated position. The new memorial site now benefits-improved access for all and a much-improved landscape.

The dedication to the previous site was held on Armistice day 11 November 1923, unveiled by the Lord Lieutenant of the County, Brigadier General W. Bromley Davenport. Cllr Denis Murphy said: “Close on 250 names of the casualties were not recorded on the plaque. To right this wrong, 14 new Portland stone plaques, quarried in Dorset have been sourced to contain the additional names. It is important that we remember and honours all the local people who have lost their lives. I am delighted that we finally have a cenotaph site that does this, and I would like to thank everyone who has made this possible.”

The project was headed up by The Congleton Partnership in conjunction with Congleton Town Council supported by volunteer residents, members of local organisations and councillors. To make the build possible, much-needed funds were raised through grants and pledges. Mike Smith, Project Co-ordinator for The Congleton Partnership said: “We would like to thank residents, relatives of the fallen, local trusts, local businesses, local clubs and organisations, plus local statutory bodies for their kind and generous donations.” The project was managed by John K Carter with Quantity Surveyor support from Mark Spendor (Stringer and Pickford).

The Cenotaph is deemed fully open and (Covid restrictions permitting) the next official event will be welcoming the usual large crowds that normally attend the Armistice Day Remembrance event on Sunday 14th November 2021.

This site uses Akismet to reduce spam. Learn how your comment data is processed.